A couple of years ago when I went white water rafting with some friends in the mountains of the state of Washington, I fell overboard and nearly drowned when I was caught in a whirlpool. Even though I am an excellent swimmer and was a lifeguard when I was in high school, I felt helpless and terrified in the grip of the powerful water.

After much research, I decided to spend a week rafting on the Colorado River through the Grand Canyon to overcome my fear before I became any older.

I did primitive camping as a Girl Scout growing up, but haven’t done any in years. One of the men at church went on this rafting trip a few years ago, so he let me borrow his solar shower, a two-gallon clear plastic bag with a hose and clamp on the end. Since the river is a chilly fifty degrees (F), you fill the bag with river water in the morning and throw it on top of the baggage on the raft to be warmed by the sun during the day. When you pull over at night, you find someone to hold the bag over you while you take a quick shower with the warmer water while standing in your swimsuit in the river.

The trip is six days long and all-inclusive with a small plane flight from Las Vegas to the beginning of the trip at Lake Mead ending with a helicopter ride out at the end. There were enough of us to fill two large rafts including our four tour guides (a mother and son, and a married couple). After we stowed our things in waterproof bags, donned our waterproof rain suit and life jacket, and shoved off, the guide gave us the “bathroom orientation”. I’ll leave it to your imagination.

They told us to drink lots of water so we wouldn’t become dehydrated. We were hot while in the sun and cool after being drenched by the rapids and when in the shade which continually shifted throughout the day.

After a couple hours, we pulled over for the night and set up camp. The guides set up a couple small tents for us to change clothes in and put the porta-potty at the end of a path. Then each person grabbed his duffle bag, and sleeping bag, and picked out a place on the sand to sleep under the stars while the guides made us a delicious dinner. After eating, we washed our camp dishes in buckets as instructed. One of the guides brought out his guitar and sang us a few songs.

I drank too much water so that I was up all night trotting off to the women’s pee tent. I washed my electrolytes out and became weak and dizzy. After that, I added salt to my food and didn’t drink as much water. I tend to have low blood pressure, so if it goes too low, I faint.

One day, I was chatting with Mary, one of the guides, and found out she is also a believer in Jesus Christ. We marveled at the beauty of the canyon, the result of the flood recorded in Genesis. With delight, we shared some Bible verses and prayed together. That night as I lay in my sleeping bag gazing up at the stars, I started humming softly to the Lord,

Amazing Grace, how sweet the sound, that saved a wretch like me. I once was lost, but now am found, Was blind, but now I see. -by John Newton

The next morning, Nicole, one of the ladies sleeping nearby, said she enjoyed hearing me hum the song and asked me to do it again that night.

The following days thrilled me when we went through the rapids while hanging on tightly. Thankfully, this time I didn’t go overboard. We got drenched several times a day and then the sun dried us off until the next rapids. We pulled over several times to hike, see waterfalls, and climb up for more of a view. I kept wishing I could stand on the rim and look down since you don’t get much of a view from the bottom looking up. 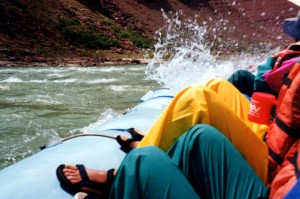 On the final day, I was the first to climb in the helicopter and fly out for my exciting five-minute ride.

I am thankful I went on this trip when I was in my thirties and didn’t wait any longer. It was more rugged than I anticipated between sleeping on the ground,  showering in the cold river, climbing up onto the three-foot-high raft, and then jumping down several times a day. I enjoyed the rugged beauty of the Canyon, realizing it was the result of the worldwide flood recorded in Genesis. If you have never read The Genesis Flood by Dr. Henry Morris and Dr. John Whitcomb, I highly recommend it.

And God remembered Noah, and every living thing, and all the cattle that was with him in the ark: and God made a wind to pass over the earth, and the waters subsided; The fountains also of the deep and the windows of heaven were stopped, and the rain from heaven was restrained; And the waters returned from off the earth continually: and after the end of the hundred and fifty days the waters were abated. Genesis 8:1-3 (KJV)

After I became a nurse practitioner, I learned about water intoxication from drinking too much water. I think I came close to that with my weakness and low blood pressure. It would have been difficult to get me out of the canyon if I would have fainted, so I thank God for His mercy to me. In the next post, I will tell how I tried to see the Canyon from the rim with nearly disastrous results.