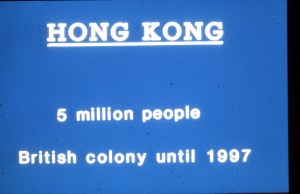 We had a pleasant stay in hot steamy Hong Kong, and experienced reverse culture shock compared to China. Hong Kong is fast-paced with a British flavor. The 100-year treaty with Britain will expire in 1997, so many wealthy and professional people are leaving because they don’t want to live under the communist regime. They call it the “brain drain”. We saw bumper to bumper cars, double-decker British style buses, a new subway and transit train, harbor ferries, and skyscrapers everywhere in this compact crowded little country. The tour guide told us they have as many Rolls Royce cars as in London and Hollywood. Real estate is so expensive that they only allow dead people to be buried for 7 years. Then the family must exhume the body, cremate it, and give the grave to someone else.

We stayed in the luxurious 18-story Golden Mile Holiday Inn. Carla and I decided to go to the tailor to have a wool dress suit made in 48 hours. We had fun choosing the fabric, designing the suit, and being measured to fit perfectly. The hilarious tailors made us laugh so hard that we cried.

I went to a jewelry factory and designed a small sapphire ring they made for me in one day. I never expected to buy so many things on this trip, but everything is inexpensive and beautifully created. I think they export all the junk to the U.S. and keep the finely handcrafted items here. I have fun haggling over prices. Sign language and handheld calculators overcome all language barriers. 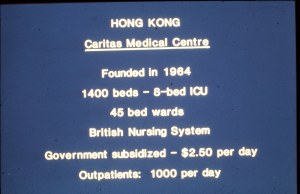 We visited a British private general hospital with ward sisters (nurses). Compared to the hospitals in China, it appeared more modern with a brighter cheerful atmosphere. The large men’s ward held 45 iron beds with overhead ceiling fans and no air conditioning in the 90-degree heat. I estimate they are about ten years behind the USA in health care.

We enjoyed a sampan ride through a fishing village where the people live on their boats year-round their entire life.

We also took the Star Ferry across the harbor and went to the top of Victoria Peak for the view.

Then on to Repulse Beach, the largest in Hong Kong for lunch at McDonald’s. It seemed extravagant to pay $3.30 for a hamburger, but the exchange rate is 12 Hong Kong dollars to 1 US dollar, so in reality, I paid 27 cents US. This was the first American franchise that we saw since leaving the States.

Carla and I ate dinner at a Korean restaurant where we barbecued our own beef and shrimp on a table grill. As the only Americans in the restaurant, we received many stares from the other customers.

We had a delicious elegant farewell dinner last night at the Peking Garden, one of the best meals of my life. Our nurse attorney leader teased me about falling asleep during the lectures that she gave to the Chinese hospital nurses. I never quite recovered from the jet lag. And now I will go through it all over again when I return home. I look forward to going home and am thankful I have another week off from work to recover and spend time with my mother who is going through cancer treatment. I need time alone with the Lord in Bible study and prayer to renew me spiritually.

I have a one-night layover in New York City before my plane takes me home. I reserved a hotel, but since my tour roommate, Carla, lives in NYC, she invited me to stay with her. In addition to being a psychiatric nurse hospital supervisor, she gives tours of NYC on her days off. She volunteered to show me around since I have never been to NYC before. The Lord graciously worked this out because this country girl feared to go to NYC more than China. The high rate of crime is all that is reported in the newspaper and my chances of being murdered in NYC seem high. Carla laughed when I told her this because she has lived there for decades and absolutely loves it.

We finally cleared customs about 6 p.m. New York time – 25 hours after I got out of bed in Hong Kong. Carla’s friends gave us a ride from the airport to their lovely home where they served us dinner in their garden. Afterward, Carla drove me through downtown Manhattan at night and waited at the curb while I took the elevator to the top of the Empire State building to see the sparkling city lights. I could hardly believe that I was in bed this morning in Hong Kong and on top of the Empire State building tonight. What a small world.

We went to bed at 10:30 p.m. and both awoke at 5:30 a.m.- still on China time. We dressed for church and ate breakfast in Little Italy. Afterward, we drove through Chinatown and then parked and took the elevator to the top of the World Trade Center for a few minutes to get a daytime view of the city. Visibility was only two miles, but I could still see the Statue of Liberty in the harbor. That Statue means more to me now after living in a Communist country for two weeks with little freedom.

We drove down Wall Street, past the federal building where George Washington, our first president, was inaugurated and saw the church where he worshiped. Then we went to a large Baptist Church for morning worship. What a blessing! The pews were packed with 1500 people who we joined in singing beautiful traditional hymns led by a 22 member choir and a children’s handbell choir. The Pastor had a wonderful heart-stirring message on the four compromises Pharaoh offered to Moses as recorded in the book of Exodus.

After church, I treated Carla to lunch at an elegant Indian restaurant overlooking Central Park. We enjoyed the great view and the exotic spices in the food. Carla drove me to the airport and we bid each other farewell. I thank God for letting me meet her and giving me such a compatible roommate during this life-changing tour.

I have been home for a few days now and have had time to think. I decided I can be more effective with the international students here at the university than I could be in China with the many current restrictions on foreigners. But I thank God for giving me a better understanding of their culture and way of thinking. I have a new appreciation for the groundbreaking work of Hudson Taylor and other missionaries in China. I wish I could have met some Chinese Christians, but God did not open the door. I value the tremendous blessings I have here in America and the freedom to worship in spirit and truth.

Since then, God allowed me to meet and minister to many people from China and have the joy of seeing several receive the Lord Jesus Christ as their Savior. In 2004, I returned to assist in the care of some orphans. I also met a number of Chinese Christians, so God fulfilled the desire of my heart eighteen years later in His perfect timing.

“Delight thyself also in the Lord, and He shall give thee the desires of thine heart” (Psalm 37:4 KJV).

Ten years later, I went to the top of the World Trade Center again for another view of NYC for what turned out to be my final time. Little did I know terrorists would destroy it on September 11, 2001.