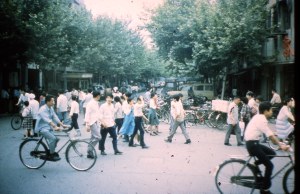 I arose at 4:30 a.m. in the Midwest and caught a 7 a.m. flight to LaGuardia airport in New York City. I waited 2 hours for the free bus to take me to JFK, but it never came. Finally, I decided to split a cab with a man who was in the same dilemma. I would have missed my flight to China except that it was delayed 2 hours. The tour director was frantic with worry about what had happened to me!

We left JFK at 1 p.m. New York time and arrived in Shanghai at 10 p.m. Saturday, China time after a three-hour layover in Tokyo, Japan. China is 12 hours ahead of New York time. It’s now past midnight and I have been awake 35 hours because I couldn’t sleep at all on the plane. My feet are swollen, but otherwise, I’m fine. We are staying at the beautiful Cypress Hotel on the outskirts of the city. I think pure adrenaline and excitement carried me here! It’s hard to believe I’m actually in China after beginning to plan the trip 9 months ago.

My roommate, Carla, is a psychiatric nurse who lives in New York City and is also single. She is about 15 years older than me and very pleasant. Her legs are swollen too. We each have a twin bed and private bathroom we share. We like the thermos of hot water beside our bed with china teacups. We both decided to put our head at the foot of our bed so we could prop our heels on the wall above the headboard over our heads to try and drain our legs! We named this “the China position!”

I read Psalm 63:1-2 tonight, “O God, thou art my God, early will I seek Thee; my soul thirsts for Thee, my flesh longs for Thee in a dry and thirsty land, where no water is, to see Thy power and Thy glory, as I have seen Thee in the sanctuary.” May God help me to give the water of life to thirsty souls.

“The idols of the nations are silver and gold, the work of men’s hands.” Psalm 135:15. Today was the Lord’s day, but I couldn’t go to church as I had hoped, because they wouldn’t allow me to leave the tour group. It hasn’t even seemed like a day of worship because we have been constantly on the go since our American style breakfast of 2 fried eggs and toast at 7 a.m.

There are bicycles everywhere and large buses that bend in the middle when they go around a corner. The buses are mobbed with people which look overwhelming to me! There are only 600 cars in all of Shanghai which has 7 million people. The cars are mostly for the Communist party leaders. I am glad we have our own little air-conditioned tour bus with our city guide and country guide, Mr. Li. Mr. Li is part of the Communist party and will be with us the entire 2 weeks to make sure we don’t talk with the people too much and watch our every move.

We went to the Bund this morning, which is the former Wall Street of China where all the bank buildings were located before the Communist takeover in 1949. It is a pretty park along the River and was mobbed with parents showing off their one child for Children’s Day. The Chinese are only allowed to have one child by law because the country has such a huge population. Interestingly, they do not celebrate Mother’s Day or Father’s Day.

About 20 people came up to me and started practicing speaking English with me. I stand out in the crowd since I am tall and Caucasian. Since foreigners have only been recently allowed to visit China, I don’t think too many of them have ever seen a tall American woman before. I gave one man a Chinese-English gospel tract my Chinese teacher had translated for me. Everyone swarmed around us to try and read the tract at once which frightened me, so I walked away. I didn’t want to start a riot my first day in China!

We also saw the Jade Buddha today. False worship is so depressing. The temple reminded me of a dead cathedral. We also viewed a pottery and bronze collection which doesn’t interest me much. It’s hard to get used to the Chinese idea of beauty. At lunch, the waiter taught me how to use chopsticks, and then we went to the arts and crafts center. I was amazed at the beautiful quality of the items and the inexpensive prices. I bought a gorgeous embroidered silk blouse for $10.

Then we ate dinner at the Park Hotel. They sat us at large circular tables of 8 with a large lazy Susan in the middle. We were each given a five-inch diameter plate and a pair of chopsticks. Then the waitresses brought out about 10 different dishes of interesting food and placed them on the lazy Susan. We took some of each dish with our chopsticks and kept refilling our little plate until we were full. No fruit, dairy, or dessert was ever served. Soup is always the last course.

Then on to the acrobatics and circus show. The giant panda was so cute and amazing as he rode a bicycle around the ring! The acrobats are incredibly flexible and did things I have never seen in the states. They dressed very modestly in long pants and high collars.

I am thankful I was able to give two Chinese gospels of John to the hotel attendants tonight. I’m so weary. I just hope I can grab some more time alone with the Lord in prayer and Bible study tomorrow.

Even though my two weeks in China were constantly busy with no time to rest, it was so fascinating as all my senses were inundated with sights, sounds, and smells. I was so shocked by the density of the population with crowds of people everywhere! It was quite a contrast to the quiet farms of the Midwest where I grew up. I was so thankful God opened the door for me to go despite my eye situation and my mother’s cancer. (See the previous post.)

Next post I will tell you about our visit to a Shanghai hospital, Suzhou – the city of silk, and Nanjing where we visited another hospital.

1 thought on “Nursing Tour of China – Part I”